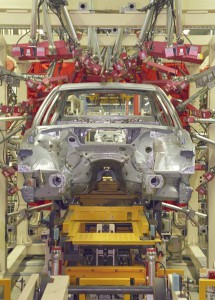 A total of 906,294 new cars were sold last month, over 13%  more than in December 2012. It was the fourth month in a row in which car sales rose on an annual basis. Sales were down 1.7% over 2013 as a whole, however, marking the sixth year of decline for a European car industry battered by a crash in demand amid the eurozone’s crisis.

The UK has persistently outperformed the broader European car market in recent months, and new car sales there rose 10.8% in 2013.